Though the Patriot Prayer members managed to end the event early, it appeared that wasn’t enough for them, as the groups leader announces plans to sue the union over comments they made about him on social media.

For many progressives around the Portland area, the fast-food chain Burgerville had always been considered something of an ally to their movement. A corporate entity reminiscent to someone’s hippy uncle whom they see once a year at family gatherings, giving encouraging cries of, “Right on!” and “Yeah man!” When hearing their nephew’s complaints against the status quo.

Burgerville and its nearly 50 locations across the northwest were always keen to listen and adapt when it came to liberal grievances. After the release of the controversial documentary, “Super Size Me.” Which critiqued the nutritional benefits of McDonald’s, Burgerville then switched their meat supply to only use organic range-fed beef from cows who lived in humane conditions and were raised without hormones or antibiotics.

When cyclists complained over the stores lack of accessibility for customers on bikes the company announced that they would accommodate their drive-through windows to be used by bicycles.

After environmentalists had concerns over the waste the restaurant created, the company added composting bins for food waste. In 2005, the company even built wind turbines to power its headquarters as they proudly announced they had gone 100% green. They remain today the largest company in the United States to rely solely on renewable energy.

Yet, when it comes to applying those outwardly progressive policies internally, the moment employees have grievances that would affect the company’s revenue, any attempts at progress instantly is halted and the talk of “doing the right thing.” and, “company ethics” which is usually repeated ad-nauseam by the chains marketing campaign is quickly replaced a level of obstinance and aggression which would make Robber Barons of the 19th century question if management had gone too far.

Since its beginning, Burgerville has always been a staple of pacific northwest eateries. What was once a single popular burger joint originally founded in the early 60s grew from a handful of locations to dozens of stores, all the way to a massive regional conglomerate that dots across Oregon and Washington state. Unbeknownst to most customers, that rise was built on 50 years of long hours and substandard wages for what many employees cited as working conditions that were far worse than other nearby restaurant chains.

Eventually, in 2015, the anger over these conditions boiled over as employees finally organized and formed what is now the only fast food union operating in the United States today.

Management was quick and decisive in their response to the new employee union. At one store every single one of the employees who signed a union demand letter found themselves being either written up, suspended, (or in one case) fired within the week. At another location, a union leader lost his job after the company accused him of theft over his manager’s failure to charge him for a 70 cent bagel he had picked up for his lunch break.

Emboldened by support from other local Carpenter Unions and the IWW resulted to Burgerville employees organizing picketing and flyering of stores. That’s when management contracted the notorious union-busting firm Bullard Law.

Union employees reported soon after this that Burgerville began using a slew of heavy-handed tactics to intimidate their members and hamper their organizing activities. Uniformed private security guards hired by Burgerville began showing up at events organized by the union and photographing members.

Though Burgerville spokespersons have said the company doesn’t dissuade people from unionizing, the employees have said differently on the matter.

“Since 2017, as many as seven workers from four separate stores have been fired for supporting the union, and an eighth was harassed and intimidated into quitting after she reported a manager for sexual harassment.” The union said in an email with Oregon Live.

In the case of the woman who quit after facing harassment for reporting her manager. The company allegedly used the report as evidence of “insubordination” and had a private investigator begin to look into her. The former employee claims the investigator accused her of being involved in a non-existent gift card theft scheme and threatened to have her arrested on felony charges while interrogating her. Workers also report that the company refused to fire the manager who had originally harassed the woman and simply transferred him to another store.

These tactics and others like them used by management since the start of union labor disputes has led to the National Labor Relations Board investigating at least 34 complaints filed against Burgerville.

The culmination of this ongoing battle finally boiled over in October when Burgerville workers went on strike. The strike ended up only lasting four days before management backed down and agreed to renegotiation with the union, but in that time it brought a new obstacle for the unionized workers that they hadn’t faced before.

The far-right group Patriot Prayer has a reputation for counter-protesting left-wing events in the Portland area. The violent confrontations that have occurred while they were doing so has resulted in many of the groups members obtaining criminal records for their self-described activism, yet members of the community said even for a group like them it was surprising when they showed up to the Burgerville picket line to begin heckling strikers as part of their goal of “supporting management.”

The Patriot Prayer members, arrived on site before the picket had even begun. Setting up speakers and a microphone system so they would be able to drown out the 20 or so strikers while they chanted and sang hymns for better wages. The hecklers used their sound equipment to help better project their own message as they yelled to the striking workers that they should get real jobs.

The group’s founder, Joey Gibson at one point approached the workers with a camera in an attempt to debate them but was largely ignored for the most part as members chanted over him. The picket of the company’s headquarters which was planned to go throughout the night soon ended early after that, with the union citing safety concerns over Patriot Prayer members harassing them.

We had to cancel our campout at Burgerville HQ because Joey Gibson and his pals came to disrupt us.

This is the same week that BV fired a POC worker for standing up to white supremacist management.#1u#BoycottBurgerville https://t.co/5ZzWBZ68Jx

Despite Burgerville losing their holdout position in the strike and the union considering it to be a success, Gibson was celebrating the aftermath of the strike for a different reason.

Announcing in a Facebook video that he had sent a cease and desist letter over the tweets and would be using legal action to take down the union himself by suing it and its members for defamation after they―according to him―falsely claimed he was harassing their members on the picket line and for slandering him by describing him as a white nationalist on social media. 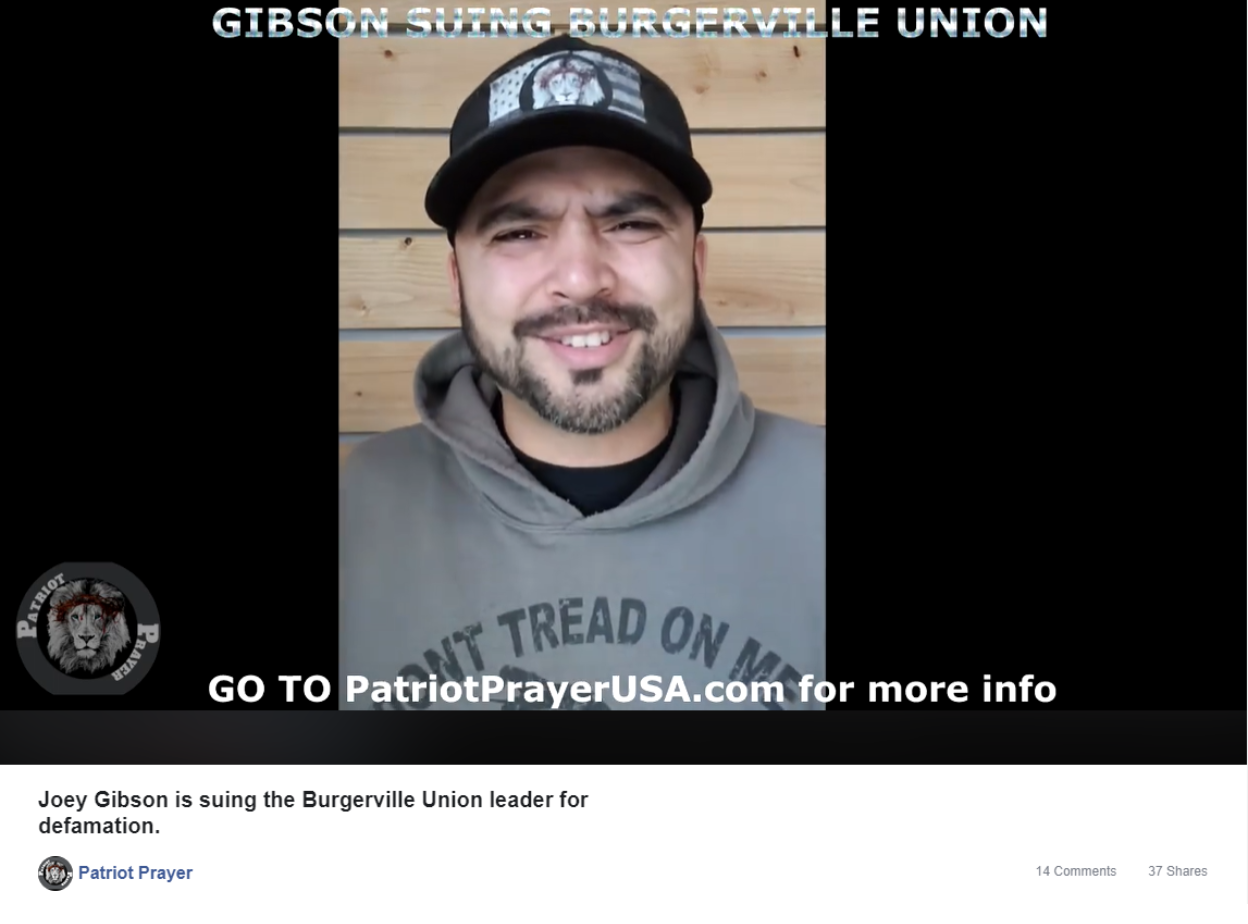 “This union is basically Antifa, they do the Antifa signs, you can see here they are doing the resist sign.” Gibson stated while showing a picture of a woman standing with her first raised while posing with a group of Burgerville employees.“The main thing is their connection to the International Workers of the World. The IWW equals communism, it equals Antifa they are all the same.”

The IWW, who helped the Burgerville workers unionize, has been a focus of Gibson since he and other Patriot Prayer members began showing up outside their headquarters armed in January. Shortly after, the IWW building was vandalized, along with another local business whose owner is currently suing Gibson over the previously mentioned assault incident.

“What they said about my client was the worst thing you can say about a person in this day and we are going to sue them for a lot of money.” Said Gibson’s attorney Angus Lee. “They released this as an official press release, so we’re going after them collectively as a union and individually.”

Lee himself is no stranger to the same type of controversies that Gibson is known for. From being reprimanded by the state bar for ethics violations, to trying to have his DUI arrest vacated while working for the courts. The now-disgraced former prosecutors history can be summed up by a Seattle Times piece that profiled his year in office.

The letter titled No Confidence Vote was signed by seven of the county’s assistant prosecutors and the administrative assistant who helped manage the county’s prosecuting attorney’s office. Their message was: Please do not appoint D. Angus Lee.

To finish the term of the county’s chief prosecutor, who had recently been elected a judge, the county’s Republican Party had forwarded three candidates to the commissioners, including Lee. The three commissioners received the warning letter about Lee on Jan. 6. On Jan. 7, they interviewed Lee. And on Jan. 8, they selected Lee to be the county’s head prosecutor. For the Grant County Prosecuting Attorney’s Office, the months and years since then have been marked by tumult, with bar complaints whizzing back and forth, along with civil claims and counterclaims, whistle-blower complaints, criminal investigations of former office personnel, and the occasional unprintable insult.

This year, the Washington State Bar Association filed formal disciplinary charges against Lee, accusing him of engaging in conflicts of interest and of trying to force an assistant to do the same. Bar officials said they know of no other instance in Washington where a county’s top prosecutor has faced formal charges while still in office. If Lee is found to have violated ethics rules, he could face possible suspension of his law license.

For his chief deputy, Lee named lawyer Edward Owens, a former police officer who got hooked on methamphetamine and wound up being convicted of a drug felony…

Since his time as a prosecutor, Lee has moved into the private practice where he now among other things, defends alleged Patriot Prayer members accused of driving their car through crowds of protestors and helps the group’s leader file lawsuits against opponents.

When asked whether or not Burgervilles corporate management had any involvement in the suit like some were suspecting, Lee denied it but told Bandr he had eaten at Burgerville restaurants since he was a child and supports the company.

Gibson, on the other hand, has been more open about his connection to the company, mentioning having friends who work at the corporate office. Despite the connection between Gibson and management, Burgerville has distanced itself from Gibson. Stating it would be investigating the incidents of harassment that occurred when Patriot Prayer showed up to the strike.

With the lawsuit having yet to be filed and Gibson’s attorney saying they are still considering whether or not to take the union to court, many labor organizers are already raising concerns over the implications of what this means.

As organized workers find themselves already struggling during contract negotiations, the fact that a third party can show up at a strike with a megaphone and pick up where management left off by taking a union and its members to court has already put many on alarm.

According to the Bureau of Labor Statistics, the number of workers who went on strike in recent years increased from 25,000 in 2017, to 500,000 in 2018. Today it stands at a 40 year high and is only expected to increase as the years go along. If that trend continues and Gibson’s suit does go through then some in the labor movement claim the courts will have given a guide to every corporation in the country for how they can shut down their employee’s unions without officially touching them.